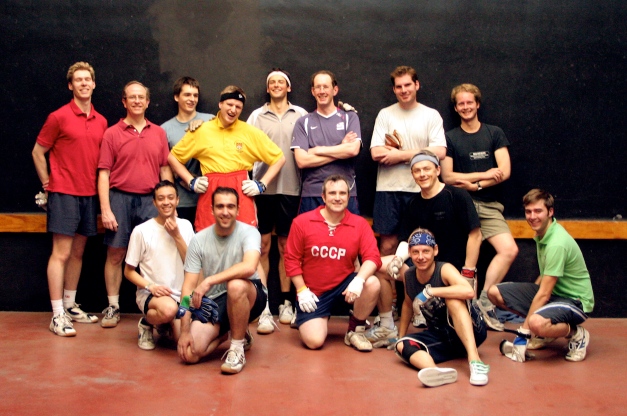 We’re a loose coalition of like-minded souls who like nothing better of a Wednesday evening than belting a small ball around a four-walled court with just our gloved hands.

For those of you who don’t know, Rugby Fives is a fine old game, with its roots deep in history and best described as ‘a bit like squash’ or ‘squash with your hands’.

And, for those are slightly worried about our club’s name, let me reassure you straight away. Despite considerable provocation, we’ve never actually killed anyone. The name was originally thought up by some former students from Exeter University, who wanted to strike fear into the hearts of their opponents. For more detail on the development of the club, see our History pages.

Nowadays, the club is a collection of players of all ages, backgrounds and abilities. Journalists rub shoulders with solicitors, Old Eastbournians tackle Alleyn Old Boys and players in their fifties take to the courts against players half their age.

During the season from September to May, we play every Wednesday evening from 7.00 to 9.30pm at St Paul’s School in Barnes. As you’ll see from our Singles Ladder, we have over 20 regular players, but we’re always on the lookout for more.

So, if you’re a player looking for a club, or just looking for a one-off game, anyone and everyone is welcome, no matter how much experience they have.

We’d love to hear from you, so if you’re at all interested in playing with the Club, get in touch with us via one of the links on the Contacts page. You’ll soon find there’s plenty of life in the Executioners.

President, Executioners Rugby Fives Club
(click on the name to send an email)