Andy and Laurence take on Cambridge Uni for the RFA

Posted by Andy Pringle on October 14, 2019
Posted in: Uncategorized. Leave a comment 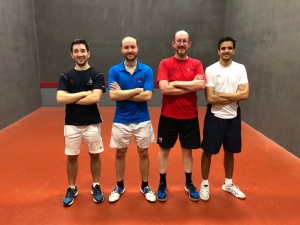 Fellow Half Blues Andy Pringle and Laurence Cook returned to Cambridge at the weekend to represent the RFA in a match against the current students. And, very successful they were, too!

Both won their singles matches and then paired up in the doubles – and continued their perfect record. In total, and despite some rather confusing swapping of team members, the RFA ran out as comfortable winners in the annual fixture by 119 points to 75.